My Dad, a Coal Miner 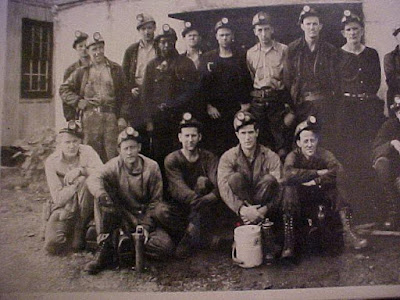 This photo was taken in 1953 at the Bellmead Coal Mines.
My Dad, Doug Evans, is the man on the front row, far left.

Father's Day is always a heartache for me.  My father died when I was 26 – he was just 49.  And he died before I was mature enough to appreciate him and all that he tried to teach us kids. Looking back on my teen-age years, I regret the grief and frustration I caused him and Mom.

My father and grandfather and many other men in our families were coal miners in West Virginia.  It was hard, strenuous work, but the men were willing to do it to provide for their families. Fathers do that.  Real men do that.  They honor their obligations, love their families, they provided what is needed.  Even if the work is hard and not very glamorous, they still get up every day and do what they need to do.

Good, bad, or indifferent, our father will always be our father. They will always be a part of who we are.  If you, like me, had a great father, try to find a way as often as you can to tell him you love and appreciate him.  If your father was less than what he could or should have been, remember that the Lord still allowed him to be your father and God doesn't make mistakes – and please remember in this situation that your Heavenly Father loves you with a perfect and an unconditional love and He can be trusted with your heart.

In 2002, I had the opportunity to go into the Beckley Exhibition Coal Mine.  The following is something I wrote at that time regarding that experience.  I share it here to honor my Dad, and in a way to say "Thank you for what you did for us every day!"

Personal Note:  I realized that when I write about my Dad, I seem to always refer to him as a coal miner, which he was.  But that wasn't his only occupation.  Dad was a WWII Marine veteran, a coal miner, and after the mines closed he moved us to Virginia where he worked as a carpenter, installed ATF bowling equipment, headed up the crew that installed one of the first satellite systems along the east coast, was a millwright, an ironworker, was such a good welder that he taught the welding for the millwright apprenticeship program, was asked to teach welding at John Tyler Community College but declined, and taught my brothers and my husband welding, too.  And he was a private pilot.  But with all of these abilities and accomplishments, Dad identified himself as a coal miner.  I don't know why; he died before I realized this so I never had the opportunity to discuss it with him. So, since he choose to identify himself this way, I do, too.

And I am proud to be this Coal Miner's daughter.  Chris

On July 19, 2002, Mom, Drake, and I took our first tour of the Beckley Exhibition Coal Mine.  Even though I was 52 at the time, I had never been in a mine and my only knowledge of mining came from hearing my Dad and Grandfathers talk about working in them.  I must say that the Exhibition Coal Mine tour has changed my life forever!

As the transport car moved from the warm, bright sunshine into the cool darkness of the mine, I physically chocked back a gasp as I was overwhelmed with the realization of what my Dad had to experience every day!  I never before realized the magnitude of it all!  The dampness, the smell of earth, the almost claustrophobic closeness of the tunnel, were daily habitat as he worked beneath the ground to make a living for Mom and us kids.

I tried hard to focus on the tour guide, Jim, as he patiently explained the details of the equipment and mining, how the miners worked the coal and handled situations.  I had to focus on something in order to fight back the tears that burned my eyes and to control an almost overwhelming compulsion to run back out into the sunshine!  My Dad had worked long days in such a place - I could hardly handle the emotion!

After what seemed like an eternity, the man-cars moved out of the tunnels and back into the summer sunshine.  We were again outside, and the warm air felt good against my face - but the reality of the mine clung to me as cold as the air I had just left.

The tour guide mentioned how the mines had been good to him.  I never heard Dad or my Grandfathers say that the mines were good to them, but in remembering what Dad and the men would say about the mines, I don't think they were ever ashamed or resented what they did.  It was honest work, it was a way to support their family, and they just did it.

For me personally, the experience of being in the mine has changed me for ever, and given me a tangible link to the realty of my heritage.  And a greater respect for my Dad and Grandfathers and Uncles who spent their days there.

Posted by The Watsons

I would love to hear your story or your comments.